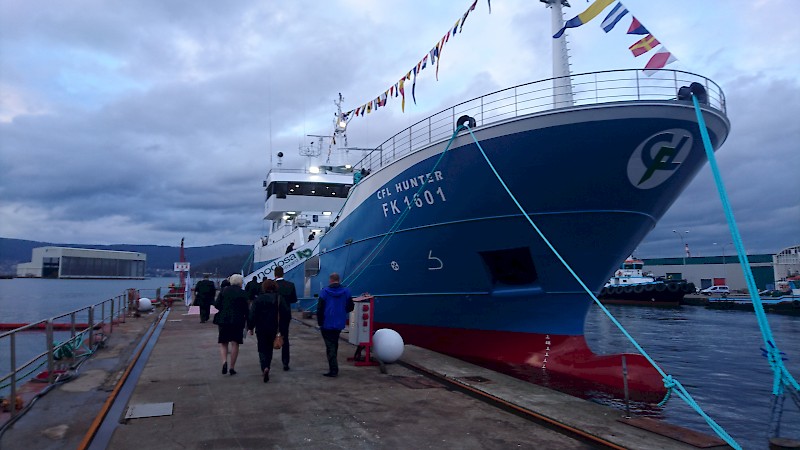 On 14th February the new longliner “CFL Hunter” was launched at Nodosa Shipyard in Marin, Spain with a ceremony and celebration marking the culmination of many years of development and hard work. MDI Napier has provided design assistance on the conversion of several vessels for the fishery over the past two decades with the owners learning the peculiarities of the fishery and developing methods and equipment to deal with the harsh environment, large fish on the line and cherished marine and birdlife. The current vessel, CFL Gambler was commissioned in 2004 and has performed well leading to a new design development with the impetus on transferring the knowledge from the existing vessel and meeting all regulatory standards for safety, comfort and the environment.

She is 59.5m overall length with a 12.5m beam and depth to upper deck of 7.17m. Power is from four Yanmar 6EY18LW 550KW generator sets driving two 700kW electric motors through a twin input gearbox giving a cruising speed of 12knots. The two main holds is have a total capacity of 720 cubic meters. Classification is I X HULL X MACH Fishing Vessel TORRE REF.CARGO_QUICK FREEZE_unrestricted navigation_INWATERSURVEY through BV. Due to her remote base in the Falkland Islands the 5 year in water survey cycle is a particular benefit to her operational cycle and management.

Particular to the fish caught in the area is the weight making them too heavy to recover through a more common auto lining system. The fish must be recovered to a traditional hauling recess on the side of the vessel with the assistance of a gaffing pole. The value of the fish also dictates a highly efficient freezing system to ensure the highest quality possible, a stipulation by the importers who have built a reputation on the quality from the CFL Gambler. The CO2 refrigeration system is capable of bringing the tunnels down to minus 40 degrees centigrade and maintain this for the 7hour freezing cycle, the only system capable and not to have an obsolete refrigerant in the foreseeable future.

The longline fishing operation is ideally suited for diesel electric installation with little propulsive power required to stay on line and a large demand from freezing and processing systems. An energy cycle analysis showed that a 13% reduction in CO2 emissions was possible from a well specified diesel electric system as well as installed machinery running in a more efficient range for both fuel consumption and maintenance cycles.

Early in the development process the local fisheries and marine officer was involved to comment on methods adopted to eliminate fowling of birds on the hooks and reduce attracting marine mammals when hauling the line. Although not a regulatory requirement the vessel is fitted with discharge hopper and valve to allow controlled discharge at night and when not hauling as well as offal tanks if zero discharge is required. Machinery is fitted to control brittle curtains when shooting and hauling the line, developed from makeshift arrangements on previous vessels.

Crew accommodation has a maximum of two crew per cabin and complies with the UK fishing vessel guidance developed from the ILO. Improved stores refrigeration and space will help maintain a better level of comfort and food for the officers and crew of 43 who’s performance and wellbeing are critical to a successful catch.

The project is an excellent example of pulling together operational and regulatory requirements, appreciation of the environmental and new technology to improve efficiency, catch quality and reduce costs of the fishing operation as a whole. Delivery of the vessel has been a smooth process with the owners yard and designers able to work towards the common goal and a feeling that everyone wanted the best for the vessel in terms of design, quality and longevity.